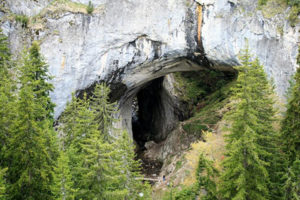 Wonderful bridges are rock phenomenon also known by the name of Rock bridges. Situated in a karst valley of the river Erkyupria in the Western Rhodopes at 1450 m altitude in the foothills of Mount Large Persenk.

Bridges are formed due to erosion activity in the deep river in the past that had transformed the cracks in the marble in a deep water cave whose ceiling over the time is tapering in some places and collapses. It is assumed that the debris from the collapse was taken subsequently by the river water.

As a result remained two known marble bridge. Both bridges are safe and suitable for tourist purposes. The transition is allowed both on and under them. An interesting tradition has arisen after the announcement of the bridges for a tourist site – every person, past under the large bridge, writes its name with charcoal on the wall.

Wonderful Bridges are among the Hundred National Tourist Sites, the Bulgarian Tourist Union: Number 85 – Mt Large Perelik, a natural sightseeing “Wonderful Bridges”, it has a seal.