The climate in this region is transitional between the Continental of Southern Bulgaria and the Mediterranean at our southern border areas. 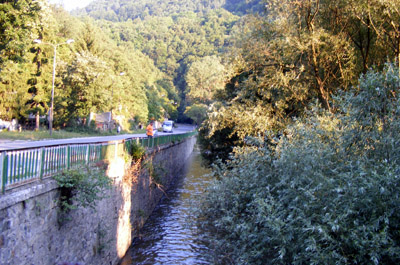 It is soft and favourable for resort-treatment because the village is protected by high mountain ranges and mitigated by the river passing through it. Winter is mild with sunny and clear days. Spring is characterized by moderate rainfall and a rapid onset of hot, nearly cloudless weather. In late March here already flower peaches, plums, primrose. Summer has no debilitating heat, with cool nights. Autumn is warm and sunny with almost no rainfall. Surrounding woodland reduces noise and cleans the air, removing many of the stimuli of the nervous system (noise, wind, dust, heat). Pleasant green colour of the resort, its silence and bright tones of the buildings also improve its climatic conditions, which favourably affect the morale of the sick people: the nervous system is balanced, phenomena of fatigue disappear, it the working efficiency enhances.

Due to the nature of valley area and location of the baths in the river valley there are favourable conditions for formation of local temperature turns. Since the temperature affects many vital functions, the relatively small daily differences in the resort makes it suitable for treating heart-sick patients, patients with high blood pressure, general weakness etc.. The air is considered moderately moist and has a soothing effect on the central nervous system. The landscape is predominantly clear due to the fresh air and has a general invigorating effect, most notably in patients with neuroses. Rarely fog falls in the valley.

The good influence on patients undergoing only to climatic treatment, give us the reason to assume that the air in the resort has no less effect on healing the body and is important in the overall treatment.

Significant role in nurturing the motor system plays the terrain treatment that is well organized in the resort. It consists of the metered walking on paths with a specified slope (3 to 20 degrees) and on certain routes by making full use of the climatic characteristics of the resort and mountain scenery. It has very good results in the treatment of cardiovascular and functional nervous diseases.