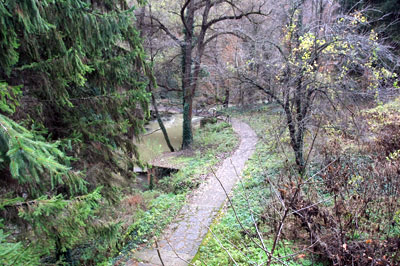 Mineral springs in the Resort of Narechen’s baths spring of several natural and sounding sources, where the majority of them are hypothermal (33ºC), slightly mineralized (1.558 g/l), hydro-carbonate-sodium with mild alkaline (pH 7.3), with moderate water hardness (15.4 German degree) clear, colourless, odourless and with good drinking and good taste properties. However, the mineral waters are slightly Radon (1306 Becquerel or 38 nano-Curie/liter), silicium (contain colloidal metasilicate acid 84 mg/liter) and slightly fluoride (Fluoride 4.4 mg/liter.). There is also a hydrothermal source with higher radioactivity of mineral water (with radon 4070 Becquerel or 110 nano-Curie/liter) and lower temperature – 21.5ºC, ie. ‘Eye’ spring, which is used for rinsing in eye diseases (chronic conjunctivitis of inflammatory and allergic nature). Favorable climatic indicators of Narechen’s baths conditioned by the gentle effect on the body (no adverse conditions for overheating or cooling) determine the Resort as a climatic, especially suitable for diseases that are sensitive to overheating of the body.

Radon enters into the body through the skin, digestive system and lungs. It passes through the skin in small quantities, penetrates into the blood and reaches internal organs. The best way to be absorbed is through the skin in water at a temperature up to 37°C. Moreover, when bathing, the solid insoluble radioactive substances are deposited on the skin which in their further degradation have a long-term impact on the body. Radon emitted during the balneo-procedure in the air being inhaled by the patient acts as in inhalation.
Standing for 40 minutes in the room for inhalation is equal to one bath. Radon received through the digestive system passes briefly through the stomach mucosa into the blood and soon is found in sweat, saliva. In fast drinking of radon water of large portions the gas is released more quickly from the body, therefore the water should be drunk slowly and in swallows. Radon received by drinking stays the longest and is released by the lungs after 2-3 hours. Part of exhaled radon is re-absorbed by the pulmonary alveoli and enters the bloodstream. Radon is kept longer in the body in drinking mineral water under conditions of rest or after meals. Furthermore, through the lungs a fraction of gas is released through urine, faeces, sweat and saliva. Regardless of how it is received, the gas is emitted through the lungs, whereas the degradation is mainly excreted through the kidneys. Radon has numerous curative properties. It works as generally calming and analgesic, improves cardiac function, expands vessels, lowers or normalizes blood pressure, increases urinary excretion, metabolic processes and activity of cells. It has a local anti inflammatory and healing effect. It is assumed that in moderate doses Radon regulates and strengthens the vital processes, enhances the activity of tissues and cells through a favourable influence on the nervous system.
On the central nervous system it has an expressed analgesic and soothing effect. After radon treatment changes are observed in electrical activity of the brain with a tendency towards improvement or complete disappearance of disease changes. Radon baths enhance the healing process of damaged nervous tissue. After radon therapy autonomic nervous reactions are normalized.
Radon baths cause contraction of capillary network expressed by the pallor of the skin. The largest vessel-contracting effect occurs at 7-8 min and disappears 15-20 minutes after leaving the bath tub. Skin temperature is lowered.
Radon has an improving impact in a weakening of the heart and its rhythm disorder. Functional disorders of cardiac activity are also well influenced.
After treatment with radon baths elevated blood pressure is normalized. In patients with sclerosis of the heart muscle their blood pressure tend to normalize.
By the treatment of patients with low blood pressure in the beginning there is greater reducing, which at the end of the treatment and later reaches the baseline and tends to normalization.
Treatment with radon water increases urine, partly due to the calcium and magnesium ions.
Radon affects all internal secretion glands by altering their functions. Thyroid and gonads are particularly good affected. Radon and its decomposition products have beneficial effects on gas and energetic metabolism. Thyroid reduces its function by lowering the main metabolism. Carbohydrate metabolism is favourably influenced, as the level of blood sugar shows a tendency towards normalization. This property of Radon water is used to treat diabetes.
Radon water retains extraction of calcium from bones, even under conditions that cause the development of rahiti. This leads to faster healing of fractured tubular bones.
During the balneological treatment with Radon water, the body is discharged from uric acid, especially in patients with gout. Radon increases the activity of many enzymes and result in improved cellular metabolism. In disorders of cholesterol metabolism, it has a regulating effect by normalizing the level in the blood.
During the treatment with Radon water a slight increase in haemoglobin and red blood cells can be found, to which the climate also contributes. A slight increase in the white blood cells is also noted. Typically, the reaction of erythrocyte sedimentation shows some delay.
Radon strengthens the protective functions of blood, and after the balneological treatment the body’s resistance to infections is increased.
Balneotherapy with Narechen’s water increases blood circulation and limbs circulation. Metabolic processes in the genitalia are increased, leading to normalization of ovarian function in women. Ovarian-menstrual function in patients with inflammatory diseases is improving due to subsidence of the inflammatory process.
Improvement occurs under conditions of reduced or absent menstruation. In patients in the initial period of critical age bath tub procedures normalize the production of sex hormones.
Activated gas deposits on the skin after bath procedure has a long impact. Due to the capillaries contraction the skin temperature drops. Skin elasticity increases especially after the tenth-twelfth bath and coincides with the period of improvement.
Radon water has a beneficial effect on healing of skin wounds, reducing inflammation phenomena.
As an indication of side effects / adverse reactions of the gas is the increase of protein released from the kidneys and bleeding, dysmenorrhoea worsening.
Particularly good results are obtained during the resort treatment in elderly. Changes occurring therewith are obvious. Their gait became more rigid, the expression – more alive, the skin of the face smoothes, and they leave the resort, refreshed and strengthened in cheerfully spirit. The explanation should be searched in the following factors:

There are several mineral springs in the resort, but for treatment are used
only two:


Used for medicinal purposes since 1891, when the first bath was built.
Banski water has three times less radioactivity than “salty” water. Currently
Banski water is used for baths and drinking from the tap in front of the
polyclinic in the park.
Water from the salty spring has a very high radioactivity – 3 times higher
than that of the Banski spring (1200 Emmen). It is therefore not suitable for
drinking, especially in people with stomach disorders, as it irritate the stomach.
The ‘Eye’ spring enjoys a certain popularity. It was captured in a rock-semi-cave being subsequently destroyed. Its water is hypothermal, sulphate-hydro-carbonated, sodium, fluorine and silicon.
Water from the ‘Eye’ spring is the least radioactive – 4 times less radioactive than that of the Banski spring. Used to rinse mouth and eyes. Its curative impact is largely due to the traces of zinc contained therein.
As drinking water is used RT diabetic patients – reinforces metabolism mainly due to the presence of residia of zinc.