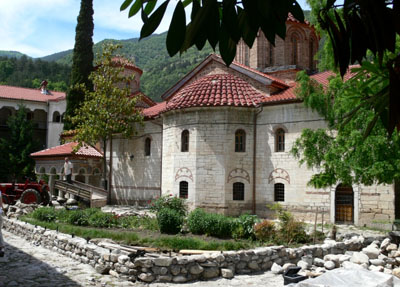 The Bachkovo Stavropegial Monastery “Assumption” is the second largest Bulgarian monastery after the Rila monastery. The Bachkovo Stavropegy is located in the valley of Chepelare river (also known as Chaya river), about 10 km south of Asenovgrad. Founded in 1083 by the Byzantine military commander Grigorii Bakuriani and his brother Abazii who are Georgians. The monastery was patronized by Tsar Ivan Alexander during the Second Bulgarian State, as evidenced by his image in the arches of the narthex in the ossuary as a sign of gratitude for his contribution in restoring the building. Like many other monasteries in the Bulgarian lands the Bachkovo monastery also houses a small school (from XI century). It is believed that after the fall of Bulgaria under Ottoman domination in the late XIV century Patriarch Evtimii was sent into exile in the Bachkovo monastery. Here the patriarch and his students develop an active religious and cultural activity. St. Evtimii died around 1404. In the monastery temple of the Bachkovo monastery is kept the miraculous icon of Virgin Tenderness. She was given as a gift to the monastery in 1311 by two Georgian travellers – Athanasius and Okrapir. There is also a legend that the icon itself “flew” from a Georgian monastery and “perched” in the “Kluvia” area. From there, the monks brought it to the monastery and put it at the entrance of the temple, to see how with what heart entere into the God’s house. Every year on the second day of Easter, they “take” it to its old place and serve a church service. The monastery has its own museum, in which ritual objects and specimens of the goldsmith’s art from different periodi can be seen. In 30’s of 20th c. 103 manuscripts and 252 incunabula are found therein.

Starting East of the monastery in the valley of the river Kluvia, you reach to two interesting waterfalls, and at the bottom of this valley there is a chapel and a large karst spring – The ‘St. Archangel’ holy spring. Here are found deposits of rare Mediterranean plant species – dendriform juniper.

Krastova Gora (‘Cross Forest’) In the Rhodope Mountains, surrounded by beautiful scenery is the St. Trinity monastery – Cross Forest or as noted in the map of Bulgaria, Cross Mount. In recent years, among the Orthodox in Bulgaria the monastery gained wide popularity as a Christian holy place of worship. To get to this holy place, you start from Asenovgrad to Smolyan. You pass the Bachkovo monastery and when you come to the road fork to the town of Lucky – Yugovsko inn, you turn to the south. You pass the Village of Borovo and 6 km. from the village you reach to the Cross forest. There are breathtaking panoramic views, a distant sea is visible from the mountain ridges and peaks.

The Gornovodenski Monastery “St. Kirik and Julita” – located in the part of Chernatitsa of the Western Rhodopes, about 2 km. southwest from the town of Asenovgrad. There is evidence about the monastery that it was built for the first time in XIVc. near the holy spring (healing spring). It was destroyed along with many other monasteries and churches during the convert to Mohamme-danism of Chepino (Western Rhodopes) in XVII century. At the end of the century the monastery was re-built in the same place, dedicated to St. Petka. A little later the old monastery of “St. Kirik and St.Julita” was also recovered near the new one. In 1810 two monasteries were burned and destroyed by Kurdjalis people.

Doll Monastery of St. Cosmas and Damian – located approx. 2 km. Southwest of the village of Kuklen in Chernatitsa of the Western Rhodopes. The village itself is about 8km. West from the town of Asenovgrad. It is believed that the monastery was founded not later than XIVc. From ancient times there exists a healing spring. In 1795 is built the ayazmo (holy spring) on which there is an inscription: Healing Spring of Holy Bezsrebarnitsi. Life-giving water of St. Cosmas and St. Damian gives strength to the souls and heals bodies of those who come to the source with their faith and draw water for any healing. It cleans grimes of all diseases.” Saints Cosmas and Damian are known in Christianity as healers, so the monastery was known as “St. Healer”.

The Muldava Monastery St. Petka is situated near the village of Muldava village about 4 km from the town of Asenovgrad (on the road to the town of Topolovo).
The Muldava Monastery St. Petka was founded in 14c. But soon after its establishment was destroyed by the invading Ottoman hordes. Like most monasteries in that region it has arisen in the vicinity of an ancient healing spring. For the first time since its devastation the records for the monastery under the name “St. Paraskeva” were found in Stanimashka (Asenovgrad) sinurname from 1519 to 1538.

The Arapovo Monastery ‘St. Nedelya’ is located near the village of Zlatovrah (ex-Arapovo) 10 km. from Asenovgrad and 30 km from Plovdiv (the monastery is reached from the town, taking over the road to the Town of Parvomai where it is marked an exit to the right for the monastery).

The Arapovo monastery was founded in the mid-19th century near an ancient spring. Construction of the monastery complex started in 1856 and for this purpose Rhodope craftsmen are invited from the village of Yugovo, headed by Mr. Stoyan Uzunov (Gudevski). In 1859 in the monastery are established a shamparnitsa and a new Bulgarian school and about a hundred students. The monastery was the scene of fight with Greek Phanariots and the Abbot Gervasiy Levkiyski established here a secret committee. In 1868 a school for priests is open in the monastery.